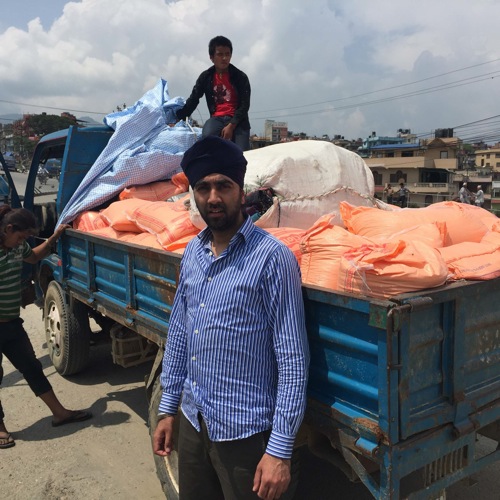 Bobby tried to join charities going to Nepal but he was hindered with red tape for vetting. This did not stop him and he went to Nepal alone, despite his family’s objections, due to their fear for his safety. Bobby decided to help people in the villages in remote areas who have not had any aid or relief from other charities. He also sent by cargo £7,500 worth of protective equipment to the rescue workers (dust masks, torches, kneepads, gloves etc). This was stock from his business and personal supplies from manufacturers. Much of this has been supplied to the Armed Police Force in Nepal and the Nepalese army. Cargo was sent by air freight courtesy of Jet Airways.

Bobby spent a week in Nepal and befriended some local residents who had been made homeless. Bobby created a team of four helpers who had been affected and on their travels other people assisted. They travelled miles through dangerous areas and mountains to hand deliver tarpaulins, rice, blankets and flooring mats to those who had nothing and were living under trees.

Bobby was in Nepal when the second earthquake struck causing further devastation and he witnessed the panic first hand as running down the third flight of stairs the force of the earthquake flung him to the side of the wall. He had a cut on his hand but was lucky to escape otherwise unharmed. He went to Delhi, India on 14th May to negotiate cheaper supplies and returned to the UK on 15th May. Upon his return, he is still determined to help the people of Nepal even more.

Bobby wishes to provide 500 semi-permanent living structures made from brick and corrugated sheeting for the roof which cost about £100 each to erect. This is because the tarpaulin is not sufficient to protect the people in the bad weather, especially with monsoon season approaching. These structures provide a half-way home to the country being rebuilt and provide the people of Nepal some normality again.

Bobby Singh has set up a Go Fund Me page to raise at least £50,000. He is willing to share his story with the media and to promote the money raising effort with the hope he can appeal to the general public to donate to his cause.

Get up to speed with the latest training opportunities

Get up to speed with the latest training opportunities NICEIC and ELECSA have launched ...

Fees frozen for NICEIC registered contractors In a move that will be welcomed by ...