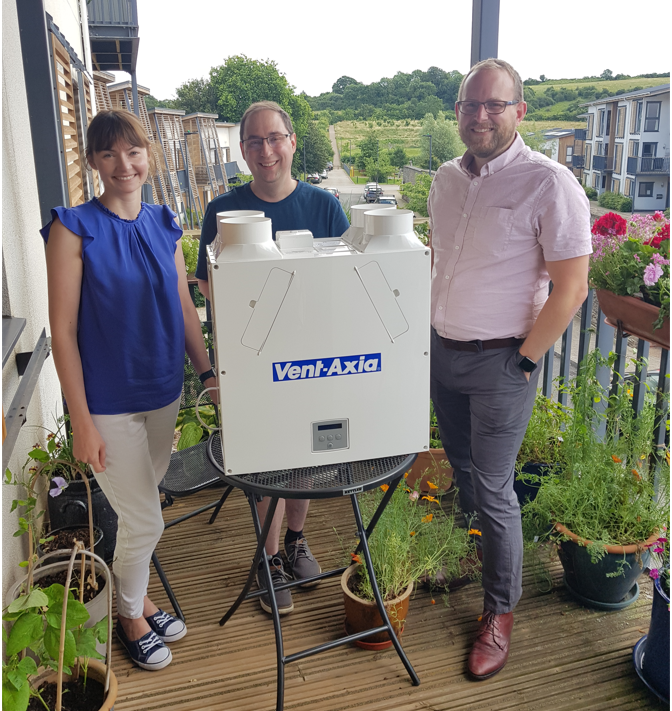 Vent-Axia has donated a Sentinel Kinetic Mechanical Ventilation with Heat Recovery (MVHR) unit to Tom and Jane Howson who are living in the award-winning Hanham Hall eco development near Bristol. The MVHR unit was presented to the couple at their home by Richard Paine, Product and Marketing Director at Vent-Axia. The MVHR unit will allow Tom and Jane to re-start the innovative ventilation workshops that they have previously been running in their local eco community. The workshops are designed to teach their neighbours how to maintain the ventilation units in their homes to help ensure good indoor air quality (IAQ), avoid condensation and mould, while explaining the benefits of features like the summer bypass.

The pioneering couple moved into their first-floor one-bedroom flat at Hanham Hall in 2013. Built by Barratt Homes, Tom and Jane chose the property due to its eco credentials and were delighted their new home featured an energy efficient Vent-Axia Sentinel Kinetic MVHR unit to provide ventilation to the property. As they had bought a thermally efficient airtight property, the couple knew that it was vital to keep the MVHR system on at all times and were very interested to understand the appliance in their home while appreciating the importance of maintaining the unit. The Howsons therefore read the manual supplied by Barratt and sought further advice from Vent-Axia about maintaining their MVHR unit, to keep it working effectively and subsequently learnt how to change its filters and clean the heat recovery cell.

However, the couple discovered that many of their community were unaware the MVHR units in their homes needed to be cleaned and maintained, while some neighbours were even turning the units off, leading to condensation and mould issues and poor IAQ. This was the driver for the couple to speak to Barratt and use Hanham Hall’s show home on site to run ventilation workshops to help educate their neighbours on how to maintain their units, how to use them effectively and, importantly, not to turn them off. So far, the couple have helped over 150 people. But unfortunately, when the show home was sold, Tom and Jane lost their workshop location. Vent-Axia therefore stepped in, donating an MVHR unit for the couple to use. Previously used in Vent-Axia’s R&D lab the MVHR has been wired as a demonstration unit and will allow Tom and Jane to run sessions again.

“We wanted to look after this place because it’s very precious. We love it. We’re also fascinated by the MVHR technology so it was a big driver for us to help educate people who didn’t know that they had to change the filters and always keep it on”, explains Tom Howson. “We’ve shown many people over the years in the show home how to look after their MVHR. And now thanks to Vent-Axia’s generosity, we can continue sharing information on how to maintain and operate MVHR to improve indoor air quality. We’re really passionate about it. Having MVHR in our home has been a game-changer for us. We’ve never had condensation and mould issues, not even in the bathroom. The grout is still as new. And my asthma is much better here than in previous homes, even though we have a cat. And should we ever move, we’d be looking for a property with a Vent-Axia unit. I don’t think we would want to live anywhere without one.”

“Tom and Jane are an inspirational couple, dedicating their time to educating their neighbours on the benefits of good IAQ and how to look after their MVHR which is an essential part of their eco home. As we try to meet Net Zero targets in 2050, MHVR is now becoming mainstream in new build homes as it ticks all the right boxes when it comes to balancing energy efficiency with good indoor air quality. We now need to educate people that just like a boiler needs an annual gas safety check, MVHR units need to be cleaned and filters changed to maintain good indoor air quality in the home.”, comments Richard Paine.

Hanham Hall is located in South Gloucestershire, five miles from the centre of Bristol. The estate is one of the flagship Carbon Challenge schemes promoted by the Homes and Communities Agency and was England’s first large-scale housing scheme to achieve the 2016 zero-carbon standard. The development has 186 homes, ranging from one-bedroom apartments to five-bedroom houses, and all homes are super insulated timber frame buildings. The scheme was judged Best Sustainable Development in Britain in the 2014 What House? Awards.

Vent-Axia is A-OK for BEAB

Vent-Axia is A-OK for BEAB Vent-Axia has received an A rating, the highest achievable ... 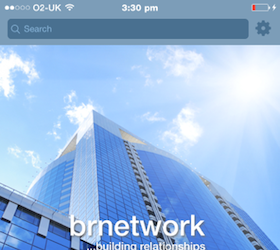 BR Network delivers over £1bn of projects to construction sub-contractors in the first five ... 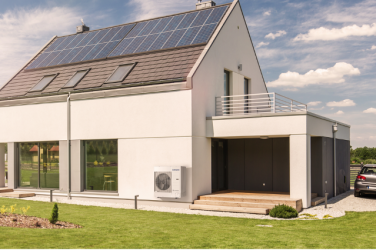 Consumers could save £160 a year on bills

A new smart system for controlling the use of electric heating and household appliances has ...