Jobs for the Girls goes to Westminster

NICEIC took its Jobs for the Girls campaign to Westminster for a parliamentary reception hosted by Chi Onwurah, the Labour MP for Newcastle upon Tyne Central.

As a former electrical engineer Ms Onwurah pledged her support for the campaign, which aims to highlight the exciting opportunities available to females within the electrical industry.

‘Just one per cent of electro-technical apprenticeship starts are women, despite half of all apprenticeships overall and half of our workforce being taken up by women,’ commented Chi.

‘I would like to thank NICEIC for launching this campaign and bringing it to the attention of those in Westminster.

‘In supporting Jobs for the Girls, I will be pressing the minister and government more widely as to what they have been doing and what they can do further to encourage more women into trades apprenticeships and into engineering and other courses where they are underrepresented.’

Nadhim Zahawi, Conservative MP for Stratford-on-Avon, also gave his backing and spoke of the need to address the gender imbalance in the construction industry as a whole. The reception was also attended by Baroness Wilcox, the parliamentary under-secretary of state for Business, Innovation and Skills (BIS).

The event brought together a cross-party band of MPs, dignitaries and female contractors with all the guests signing a board pledging their support for the campaign. Among those who provided a signature were Peter Bottomley MP, Lord Cotter, Gordon Marsden MP, Meg Munn MP, Mary Glindon MP, Julian Huppert MP and Ian Lucas MP.

NICEIC’s CEO Emma McCarthy added, ‘It was great to speak with other women and learn about what entering the construction industry means to them and what a realistic proposition it is.

‘I would like to thank Chi for backing NICEIC and the pledges of support for our campaign which mean we can spread the word, engage with young women and do something positive for the industry.

‘NICEIC will continue to promote Jobs for the Girls and look to gather further support from other organisations in the construction industry to take it even further.’

57 years and counting for Dimplex towel rail A Dimplex electric towel rail is ... 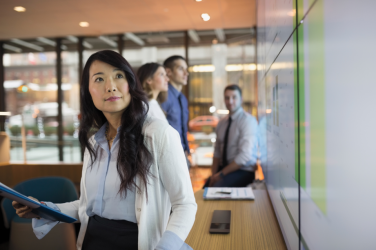 Business Continuity Made Easy Any interruption to business continuity represents high risk. In this ...