London based trade installers can take advantage of free Renewable Energy workshops throughout October and November.

Funded in part by the ERDF (European Regional Development Fund) and spearheaded by the Institute for Sustainability, Flash, working in partnership with NAPIT, provides access to specifically designed workshops which focus on business opportunities relating to low carbon emissions and the renewable energy sector, including:

NAPIT sales and marketing director Andy Sharp commented on the positive feedback which the initial round of Flash courses attracted,

‘It’s clear that these workshops are simply invaluable for all involved in or affected by energy management, so whether in a commercial or economic capacity, installers can join the network for more information and gain further insight into a green marketplace which is bursting with opportunity.’

Flash is available to businesses with a London borough postcode, an annual turnover of under £42m and fewer than 250 employees. The free Flash workshops have been scheduled throughout the remainder of the year and include:

For further information, queries or to register for any of these events visit: www.lowcarbonessentials.co.uk/flashelectricalnetwork/ 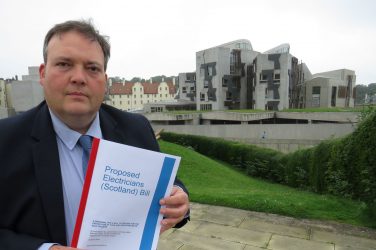 Electricians urged to add their voice to consultation on regulation

An MSP who is leading the call for recognition of electrician as a regulated ...