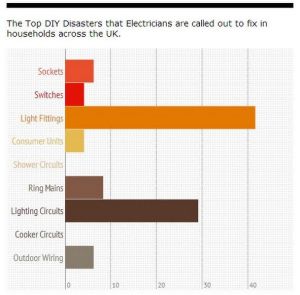 The top two responses come as little surprise and they are by far the most common reason for DIY electrical call outs. However, the rest of the responses clearly indicate that DIY electrical is still very much live and kicking.

Coming out in top place for DIY fixes is light fittings at over 41 per cent. This was also the top response to the ESC survey. The temptation to fit the latest light fittings can have devastating effects for householders. Typical problems encountered with light fittings include brass fittings becoming live, nails being used to mount light fittings and causing the lighting in the home to stop working altogether.

With many householders attempting to fit light fittings themselves, this response was bound to be somewhere near the top. Over 29 per cent of electricians regularly get called to repair botched lighting circuits. This is normally seen when householders attempt to replace their lighting and they have more cables than they know what to do with. The consequences of incorrect wiring can cause expensive damage and risk of fire.

The impact of DIY electrical work

With one person killed every week, thousands injured as a result of an electrical related accident and electrical fires being the main cause of accidental house fires, it is clear to see that electrical safety messages are not getting through fully to the people who would most benefit.

DIY blunders account for over half of serious electrical shocks according to the Electrical Safety Council. Typical mistakes include drilling through wiring in walls, repairing an electrical appliance while it is still switched on and cutting through power leads. However it doesn’t stop there. One fifth of people with no electrical training say they will confidently attempt to install lighting in their home and one tenth would happily install new wiring.

A third of electricians recently surveyed by the ESC say they are now spending a quarter of their time fixing DIY jobs and this amount of time has increased over the last five years. Many of these jobs are a simple job for an electrician to carry out and as a result has cost the householder far more than it would have done to call an electrician in to do the job in the first place.

DIY electrical work has the potential to cause fire, serious electrical shock or high financial costs to rectify. Just because it works doesn’t mean it is safe!

What can we conclude from this?

Despite advice given by the ESC and by electricians themselves to always call an electrician to carry out electrical work, it seems that many householders still ignore the advice and continue to risk their life and pocket by carrying out work which they are not trained to do.

Work carried out by a qualified and registered electrician will be expertly installed and tested for safety. The household will also receive a Part P certificate which confirms the work was carried out to governmental standards and will be needed in the event of the house being sold or rented out. 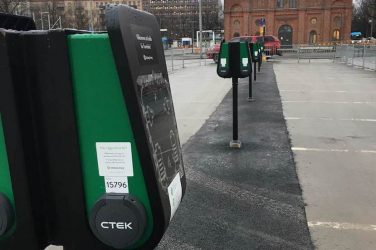 Established in Sweden, CTEK is a leading global brand in battery and vehicle charging, ... 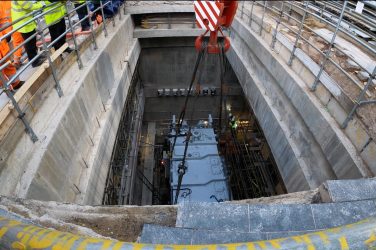 UK Power Networks is this year making an investment of more than £100 million ...